“How did I get myself into this position?” asked Chris Demaras as the karts rolled off for the formation lap. Having set a 38.9 second lap during qualifying, Demaras was sure that he would be starting from the top half of the grid. “I think Goodwood is making a mistake by not showing the results of qualifying. There is no way I qualified last!”.

The frustration with Goodwood’s practices is not just sour grapes. How could a driver go from the second step of the podium one week to last place the next week. Are the karts to blame? They’re supposed to be equally prepared. Were the qualifying times written doen wrong? Who knows. Driver’s aren’t given their times…just shown a starting position. 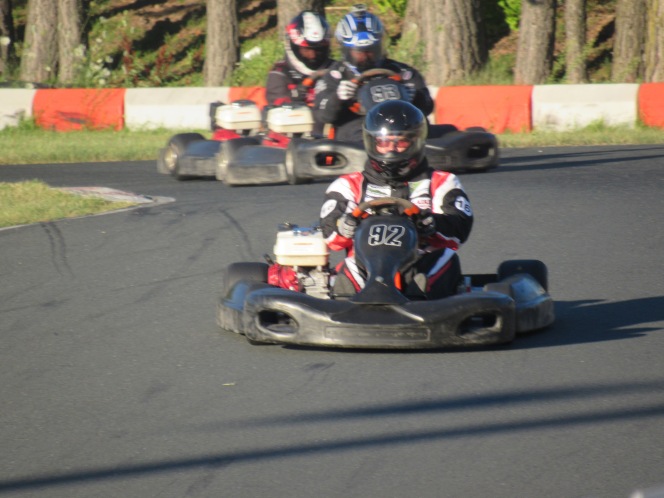 During the practice sessions, driver #16’s times improved steadily. Session 1 saw times improve from 40.1 down to 39.5 second. In sessions 2 and 3, Chris set times in the high 38 second range, with a low of 38.7 seconds…so his qualifying time of 38.9 was consistent, and should have had him starting from further up the grid. Was a mistake made by track officials.

During the race, Chris made a clean pass at turn 6, and saw drivers lose control (apparent DNFs). Demaras made multiple attempts to pass slower drivers at the hairpin, but could not close the deal. In the end, he had to settle for 5th.

After the race, the frustration Demaras felt boiled to the surface.

“I like coming to Goodwood, and I love racing in the CRKC, but when there is no transparency with regard to qualifying times, how are drivers supposed to have confidence in track officials? There’s apps available to Goodwood to show telemetry from each kart. We saw that at the finals last year…so why is it not being used now? Hell, why not just print up the times and put them on the bulletin board. I just cannot accept that with 50 to 75 drivers all qualifying one after the other that the track officials get everything right every time. I think they made a mistake, and it cost me.”.

Demaras is left to wonder what might have been.