Wednesday night, middle of August. Back to the track. It’s been weeks since the Demaras men have raced at Goodwood. So many club races at Mosport, almost makes it feel like coming home again. Even old pal Nico Hines from Mosport showed up to race.

After missing the last CRKC round due to family commitments, Daniel was happy to see friends and competitors back at the track too.

The reverse layout (with chicane) tends to favour smaller drivers, but Daniel has always enjoyed the unique layout. The chicane is a rarely used part of Goodwood that can be a challenge, and a passing opportunity. 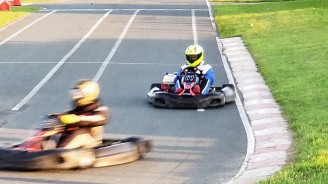 With quick laptimes in the low 41 second range, Daniel put his kart on pole position during qualifying. He drove a conservative first few laps, feeling out the reduced grip level of the track as the sun set, and temperatures dropped.

Demaras built a gap to 2nd and 3rd behind him, and brought the kart home in 1st place. Daniel\s dominant performance helped build more points in his championship quest, after missing the last two races.

After a minor mix-up, Daniel stood on the top step of the podium once again.

Chris Demaras has been having a rough month. Mechanical failures in practice sessions, combined with being crashed out of the last two events, have made him question continuing to race in CRKC.

Even Goodwood Rob commented “When I see a kart stopped on track, and someone is walking towards the pits…odds are it’s Chris!”. 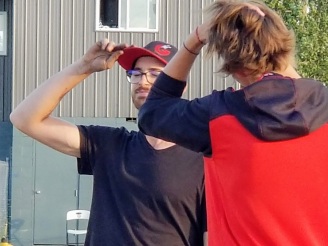 The day wasn’t completely problem free. In two sessions, the MyChron failed to register laptimes, making it difficult for Demaras to judge his performance. Then in FP3, a fuel pickup problem ended Chris’ session early.

But the on track activity was clean, and Chris managed to avoid collisions with other drivers. The layout makes it difficult to pass, and the races a little processional. But this week, Chris just wanted to finish on track, not in the barriers.

Demaras qualified 6th and finished 7th, passed only by long time CRKC competitor Chris Korab-Laskowski, who crushed the spirits of his competitors by qualifying on pole, starting from the back of the pack, and making it up to 2ns place.

Special thanks to Nico, who took all the video of the Demaras’ races after he put on a commanding win of his own (from pole…yellow box).