Dark clouds overlooked Mosport on the day of MIKA Race 4, in what would turn out to be a very exciting day.

Set for the practice session, all the Briggs Junior drivers were on the grid, equipped with racing slicks…ready to roll out. As the racers sat in their karts, bone dry, the rain came pouring down. One driver quickly backed his kart out of the pits, and several other did the same until the grid was empty. Teams and drivers rushed to put treaded rain tires on. Daniel didn’t. The sun came out, and the karts returned to the grid for practice. Some drivers had wets on for practice, but many didn’t. Daniel got three laps in until it started pouring again. Drivers on wets started flying past him, so Daniel made the wise decision to come into the pits early. 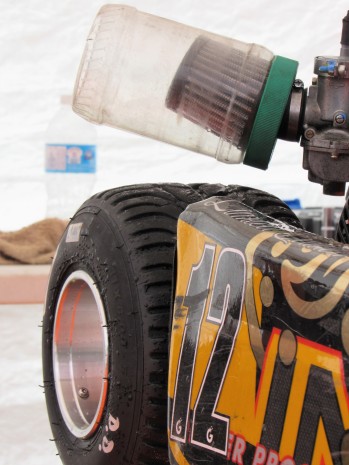 Daniel ended up 10th of 22 racers in the session, making him one of the faster drivers on slick tires. However for qualifying, like everybody else, Daniel put wet tires on, and ran a full wet setup.

“You would’ve had to be crazy to go out on slicks at the beginning of the session, but by the end it’s possible that you could’ve gained an advantage by running them…provided you didn’t hit a wall.” Despite the fact that Daniel regretted running wets, he still qualified a season best of 12th. 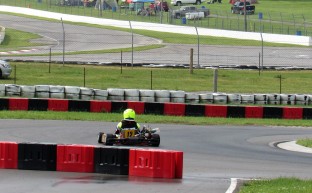 Once again, there was a change in tire compound for the pre-final, with all drivers going back onto slicks. As the green flag fell, Daniel had a messy start, trying to get over to the right side of the track. He lost four places off the start, and wasn’t able to make them back up as there were yellow flags for most of the first two laps.

Daniel attempted an outside pass on a tight section of track, but a rival attempted a move on the inside of the same corner. Driver #12 managed to get out ahead, but barely. He made a move up the hill on turn two, but without knowing, Daniel made contact with VRS teammate Keidon Fletcher, who was attempting to go three wide. This incident sent Daniel’s teammate out of the race. Daniel ended the pre-final in 13th.

Daniel was unhappy after the pre-final due to finishing lower than his starting position. Daniel had a chat with Venom Racing Solutions owner James Treadwell. Driver #12 complained the kart was suffering from oversteer, and James suggested taking a gamble by running the “torsion bar” to stiffen the kart. Nearly all drivers remove the torsion bar, so Daniel was skeptical. James figured that it was worth taking a risk, and advised Daniel to view the entire weekend as a test session. He gave Daniel tough news, saying “You’re not going to win today.”

Daniel started the race on the outside row, giving him a chance for a more successful start. He immediately put himself all the way into ninth position, and was very close to the leading pack. On lap five, Daniel had a front row seat to a battle between two drivers, which lead to a big crash and one kart going off track. Daniel capitalized, passing drivers on the outside of the straightaway, and then swiped down to the inside of turn six at the top of the hill for another overtake. Daniel made one more position, then he started to slide down the order as his tires overheated.

Daniel was then locked into an intense battle for eleventh with a driver who, according to James Treadwell, is “the smartest racer out there.”.  The rival racer hit the brakes later than Daniel did into the hairpin, and gave Daniel a bump, sending Daniel into the corner with too much speed, allowing the other driver past. That same driver made a mistake on exit, thinking Daniel was further back than he really was, and turned in on #12. They made contact but stayed in their positions. On the final lap, Daniel’s rival went down the middle of the main straightaway, and Daniel took the outside line into the hairpin, and managed to make the move stick. Daniel crossed the line in a season best finish of eleventh. 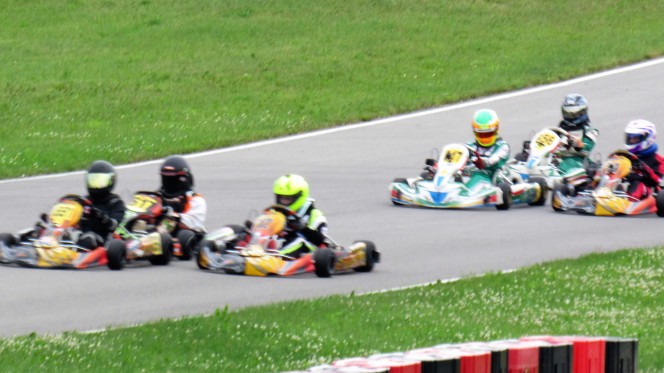 Twenty minutes after the race, there was news that the top two finishers had been disqualified for failing tech inspection. promoting Daniel to 9th, his first top-ten finish in club racing.

It didn’t last. Later, the penalties were overturned, and Daniel was classified as finishing in 11th place.

After the race, Daniel had this to say about the whole event: “Today was an absolutely insane day. From the confusing weather conditions to my hectic race, there was really no time catch your breath. I’m absolutely thrilled with today’s result, and I hope that as the season progresses I can have more days like this.”

Hopefully one of many more exciting days at the racetrack.