Daniel Demaras arrived at a rainy Mosport Kartways for the season finale. He came with a 10 point lead over Joshua McDonald, who was 3 points over Rebecca McDonald, his sister. 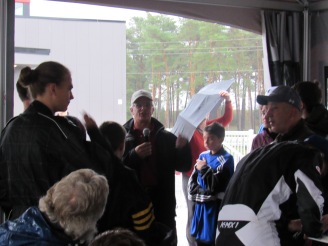 In practice 1, Daniel struggled to find a groove, driving very quickly, but messing up several times in the soaked track, and hitting the wall in the outer bowl at one point. The session was quite a learning experience, as Daniel topped the timesheets in the next two practice sessions. However those were on a drying track, but on a fully dry track, Daniel fell to third in qualifying. 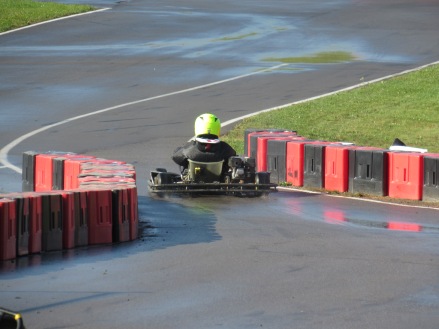 In a different group, Rebecca McDonald came second, provisionally putting her in the championship lead by 3 points, but ruling her out, because in Daniel’s group, there were 7 drivers, and seventh place gives you 4 points due to double points, so even if Daniel came last, he would still beat Rebecca.

Under the tent, the tension was clear. Daniel had a chance to win his first racing championship, as long as he finished ahead of the sixth place qualifying Joshua McDonald.

The groups was called to their karts, daniel settled into his kart, which he didn’t fit in, but that was not on his mind. A mistake free race was. As the green flag waved, the first two starters took off up the hill, and Daniel drove away from everyone behind him. Daniel drove an easy race to cross the line in first, and win the championship.

He lifted his visor and yelled “I AM THE CHAMPION!” as he head up the hill for the final lap, now after the race was finished. Swerved his way down the hill with an arm in the air. The championship was his.

The 2016 season at Mosport was one to remember. From the heartbreak in the opener, where Daniel led every lap, but had to fix his neck guard which wasn’t working while wet, and amongst the commotion lost the deal and was involved in a collision, finishing second, to the controversy of certain karts having more pace than others and in that, finishing second. There were also moments of glory, a last corner pass on Graydon Lief, a dominant win from pole, and now this. The Sunday champion. Beating out more experienced opponents, Daniel felt great as the team left Mosport Kartways for the final time in 2016.

In the pictures below, Daniel is seen celebrating with his father, while his sister Michelle is looking glum, because her brother didn’t give her the trophy. The struggles of a champion.