As the sun rose in Uxbridge, 100 drivers piled into the Goodwood Kartways facility for the CRKC finals. So many championships at stake, drivers from every day, it was shaping up to be an exciting day. 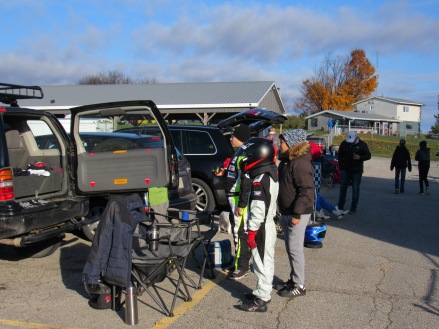 Daniel and Matte Ferrari walked the track, which was set in the reverse configuration with chicane. Daniel’s sole conclusion after seeing the track is “it’s cold”.

Cold it was. In fact so cold, that grip was the only thing anybody thought about while on the track. Everybody but Daniel, who was going as fast as possible around the reverse track that he loves so much.

Daniel managed to get around pretty well, and was fairly confident heading into qualifying. Confidence isn’t what gives you pole position though, as Daniel learned that with his only two laps in qualifying laps being ones where he was impeded. “It sucks” Daniel said after the session. “I’ve had so much pace but qualifying just didn’t go my way. I’m really going to have to work hard in the race if I want the championship.” 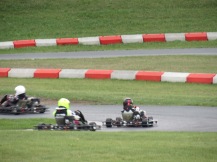 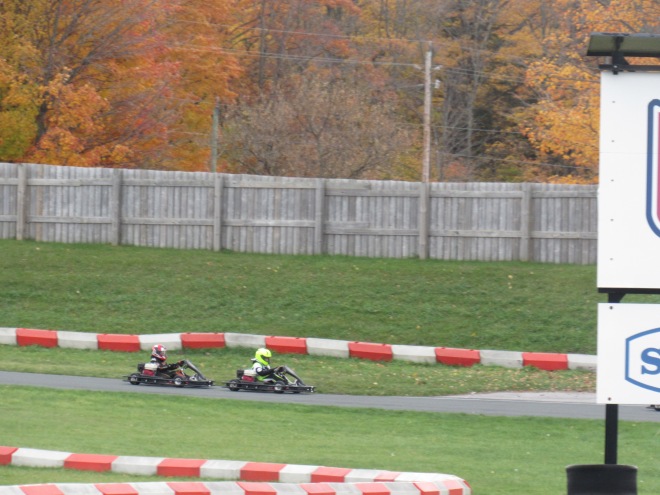 Out of the four drivers battling for the Friday championship, only Daniel and Ivan Kosar were in the same group. Christiana Febrarro finished an underwhelming seventh, all but eliminating her from the championship. Then came Alexander Holyer’s group, where a chaotic race left many scratching their heads. There was a three way battle for third, one that Alex was just left out of, as he drove in sixth, when two kids went side by side into the chicane. The kid on the outside didn’t want to risk a collision, so he skipped the chicane and went down the straightaway, which should’ve been grounds for disqualification, but he gave back the place he gained by doing that, but it was unclear whether he had been penalised or not. Daniel assumed he had, meaning that he’d have to finish second or higher for the championship, because the penalty would promote Alex to fifth.

Daniel started the race in sixth place, a dissapointing result but what he expected, and as the green flag waved, he was determined to get the championship. Daniel was following Adam Ali very closely for the first few laps, and as Adam tried to make the pass for fourth, Daniel went on the outside, then inside of the chicane and got the pass. Adam tried to get back into turn one, but the move didn’t work. Ahead of Daniel, fourth and third place came together coming out of turn four, with one driver in the dirt, gifting Daniel fourth place. Daniel fought long and hard to keep the position, including a gutsy move on the outside of the chicane, and eventually came home a modest fourth. Alexander had won the championship, Ivan finished ninth, giving Daniel second in the championship, the same fate that he suffered one year previous.

That sad result did not last.

As they called the drivers up for the podium, Daniel was given third place, because of the collision up ahead, Daniel got third due to a penalty. The extra two points wouldn’t be enough for the championship however, and Daniel was still bummed.

Once again, that did not last. As it turns out, Alex did not get promoted to fifth, and as they called up the top three for each championship, third was a shellshocked Ivan Kosar, who thought he had the championship wrapped up, and in second, as Daniel walked up to the podium, the name Alexander Holyer was said. Luckily Alex wasn’t there to hear this sad revelation, but one that the Demaras Auto Racing Team would celebrate. Daniel Demaras had won the 2016 Goodwood championship!