The Demaras Auto Racing Team arrived at Goodwood early on Friday, taking time to show video evidence from the previous race, hoping to clear Daniel’s name, and remove the penalty from his record. While Track Marshal Boyle agreed that the penalty was not Justified (and that Daniel should not have been penalized) the rules of the series prevent race results from being altered. The video evidence was dismissed, and the penalty would stand.

Not letting the bad news get him down, driver #12 got to work in practice, setting quick times in the reverse configuration. 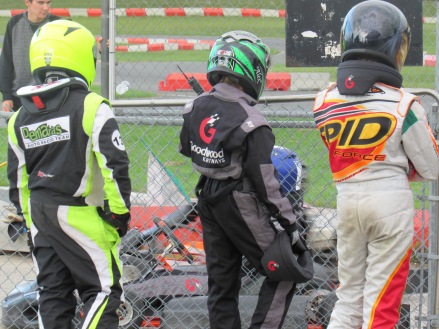 Demaras qualified 2nd, behind pole-sitter Alexander Holyer, who seemed untouchable on this night. Behind Daniel was championship rival Cameron Cluett, and much further down the order was the points leader Ivan Kosar, off the pace all day.

Young Daniel fended off attacks from Cluett throughout the race,  defending his position, but not making up ground on the leader. Demaras finished on the podium again, with a respectable 2nd place.